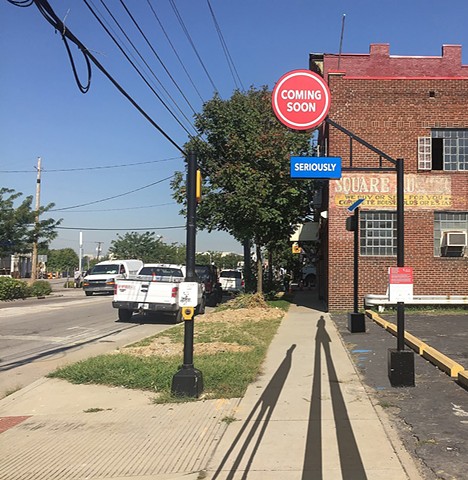 Coming Soon...Seriously is an artwork created for the launch of the Indy Red Line Rapid Transit System.

The meaning of this piece was intended to change over time in fitting with the two different phases of the Redline. The first being the construction phase; Coming Soon...Seriously stood to bring a little humor to the temporarily chaotic scene on Virginia Avenue by letting us know that the long awaited bus system was finally in the works and would be up and running soon.

The 2nd phase is right now- the Red Line system is up and running and a bus will actually be coming every 10 minutes. In other words it will always be coming soon.

This project is made possible through Indianapolis’ participation in Transportation for America’s Cultural Corridor Consortium program, which is funded by the Kresge Foundation. Additional support is provided by Central Indiana Community Foundation (CICF), IndyGo, and LISC Indianapolis.

3CIndy is a partnership between Transit Drives Indy and the Arts Council of Indianapolis. 3CIndy is developing a culture of public transit in Indianapolis by working with artists to support the Marion County Transit Plan and connect communities’ transit needs with the agencies who can meet them.